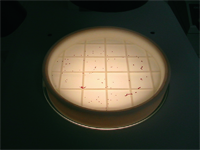 Biorep Technologies is an original equipment manufacturer for the medical industry, focused primarily on developing devices required to find a cure for diabetes. Biorep is affiliated with the world-renowned Diabetes Research Institute in Miami, and strives to offer islet isolation equipment at a reasonable price to give access to the technology to as many research centers as possible.

Engineering Director Felipe Echeverri and R&D Engineer Andres Bernal lead Biorep’s design team. Since the company’s founding in 1995, they had used a machine shop for prototyping. Occasionally, Biorep would work with service bureaus to produce rapid prototypes of small parts to evaluate designs.

By 2007, as Biorep’s equipment became more compact and sophisticated, Echeverri and Bernal found themselves needing to outsource rapid prototypes of small parts more frequently. The volume reached a point where it made business sense to bring rapid prototyping technology in-house.

“At the time, Biorep lacked a cost-effective way to produce rapid prototypes,” recalls Echeverri. “When we outsourced 3D printed models, they were often more expensive than the cost to machine them in-house, and it wasn’t much faster. We knew we could really accelerate our design productivity if we had the ability to print a part overnight, in our office. So we began to evaluate 3D printing systems.”

Objet Eden250 selected for its ease of use, finish quality

Biorep’s criteria for an in-house 3D printing system were: accuracy, ease of use, maintenance requirements, surface finish and price. “Most often, we use rapid prototypes to prove concepts and check fit, form, and function before committing to tooling for injection molding – so accuracy was really important,” says Echeverri. “But we also estimated that we would produce about twice as many prototypes if we had in-house capabilities, and we have a small team – so ease of use and reliability were also crucial.”

Biorep ultimately decided on Objet’s Eden250 3D printer – a smaller system that provides the perfect entry point to the world of high-quality rapid prototyping. It brings the market-leading advantages of Objet’s patented PolyJet™ technology into the reach of almost any design or manufacturing operation. The Eden250 provides a complete solution for the accurate building of any geometry – easily, quickly, cleanly and cost effectively. Models produced on the Eden250 are smooth and durable, with fine details and outstanding surface finish. With a small footprint, this cost-effective system uses a completely clean process, making it ideal for standard office environments. Unlike some other 3D printing systems, it fits through a typical doorway, making installation simple and quick.

“The Eden250 was a perfect fit for what we needed,” says Echeverri. “It is office friendly, clean, easy to use, easy to maintain and yields accurate parts with great surface finish.” 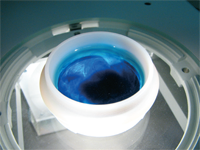 Echeverri reports that the Eden250 has helped his team produce better designs and accelerated time to market for new products.

One recent project that epitomizes both of these benefits is Biorep’s patent-pending Pinch Manifold. According to Bernal, traditionally, medical labs evaluating fluids have used a device called a pinch valve to keep fluids in silicone tubing from coming into contact with equipment. Pinch valves literally pinch the tubing closed to contain fluid. However, pinch valves tend to overheat and rely on tubing pressure for operation. They are not terribly reliable, and are very expensive. In the event of a power outage, pinch valves may unexpectedly open, releasing the fluid inside.

The result, Biorep’s Pinch Manifold uses a series of cams and a motor to control fluids in several channels with the required no-contact feature of traditional pinch valves. “Our Pinch Manifold provides a new means of indexing fluids with absolutely no contact with valve parts,” says Bernal. “The fluids only come into contact with the silicone tubing, which is disposable. In a sterile lab environment, it is really important to avoid contamination of the equipment from the fluid – often blood or bacteria – being handled. So a no-contact valve is critical.”

In addition, Bernal says, “The system can be expanded to as many channels as you want, so it’s much more efficient than a traditional pinch valve system, which can typically handle just one channel. And because it’s mechanical rather than electromagnetic, it’s fail safe. In the event of a power outage, it retains its position.”

Bernal began experimenting with designs, and all were prototyped on the Eden250. “We very quickly realized that we were onto something big,” says Echeverri. “We used an Objet prototype to present the project to management, and it really helped us sell the concept. We got the goahead to continue right away.”

“Our ability to produce rapid prototypes in-house was absolutely crucial to the success of this project,” says Bernal. “First, we were able to design parts without regard for the limitations of machining, which really freed our thinking – when we had a new idea, we could design, print and test it right away. And second, because we were able to produce a lot of prototypes very quickly at very low cost, we did a lot of testing. That helped us find and fix some functional problems very early on that really would have hurt the project if we hadn’t found them until later.”

The Pinch Manifold has about a dozen parts not including the motor, and all were prototyped individually on the Eden250 and then assembled. Some early concepts could not have been machined due to their geometry. “We produced five complete prototypes in all, plus dozens of individual parts along the way,” recalls Echeverri. “We would set up parts to print overnight, and when we came back in the morning we could test the new concept right away.

The Eden250 probably shaved six months off the project, which enabled us to get the Pinch Manifold to market that much faster.”

Another recent Biorep project enabled by the Eden250 is a Silicone Membrane Petri Dish – which Biorep calls the “Oxygen Sandwich.” A standard plastic Petri dish only allows oxygen in from the top. Scientists at the Diabetes Research Institute (DRI) hypothesized that the cells in a dish could breathe better, and thus be more viable, if oxygen could reach them from both the top and the bottom.

“Silicone is permeable to oxygen, so we decided to try to create a Silicone Membrane Petri Dish,” says Echeverri. “DRI scientists developed a proprietary silicone blend that enhances oxygen permeability – we call the design the Oxygen Sandwich because it envelops the cells in oxygen from above and below.”

DRI scientists created the membrane; Biorep’s task was to design a means to hold it with the form and function of a standard Petri dish.

Echeverri’s team prototyped the initial design on its Eden250 and then experimented with many different approaches to ensure manufacturability and proper assembly. “The final design of the membrane is just 300 microns thick – strong enough to be handled in a lab without getting damaged, and taut enough to prevent sagging. We did a lot of prototyping with different configurations to arrive at that conclusion,” says Echeverri.

The team also used prototyping to ensure the design could be mass produced. The prototypes produced during that exercise were recently used to apply for a National Institutes of Health (NIH) grant to help fund continued development of the product. “Having a realistic prototype, produced on the Eden250, definitely helped us prove the concept and get the NIH grant,” says Echeverri. “CAD drawings just aren’t as effective when you’re presenting a completely new type of design.”

It took just six months to move Biorep’s Silicone Membrane Petri Dish from the drawing board to its current status: field testing in a number of labs. “Six months is an incredibly short time to get a medical device into field testing,” says Echeverri. “Our ability to produce rapid prototypes inhouse cut the development time in half.”

Early field testing results are promising: DRI scientists report that the cells are healthier and produce more insulin, which is crucial for advancing diabetes research. Biorep is also very optimistic about the commercial possibilities for the product in areas beyond diabetes research such as stem cells.

Biorep R&D engineer Bernal wholeheartedly agrees with Echeverri’s assessment that having the Eden250 in-house has helped improve the overall quality of Biorep’s designs. “Having the ability to quickly prototype in-house has really promoted thinking outside the box in terms of design,” says Bernal. “3D printing enables us to rapidly test innovative concepts by skipping designfor-manufacturing considerations. With the Objet printer, we can prioritize design intent and leverage on assembly consolidation for proof of concept.”

Echeverri says that having in-house 3D printing capabilities has also helped to diversify Biorep’s product offerings and revenue. “We can now design and prototype a wider range of projects,” he says. “For instance, right now we are working on projects ranging from ophthalmology research applications to surgical instrument concepts. We did not have the time or resources to do those in the past.

Our product development cycles have been accelerated because we can now manufacture different design concepts in parallel. The ability to print parts overnight, unsupervised, has been extremely helpful, and allows us to bypass the cost and delay of different setups associated with traditional machining.”

In fact, Biorep has found so much value in its Eden250 that the company is now considering adding a second 3D printer that can print functional parts using a wider variety of materials.

Echeverri notes that while Biorep has certainly gained enough monetary value from the Objet printer to justify its cost, the real payoff is the knowledge that the devices they prototype and perfect will help change people’s lives. “That’s why we do this,” says Echeverri. “This is all about finding a cure.”