As one of the top research institutes in the country, North Carolina State University (NCSU) in Raleigh holds more than 580 patents in a wide array of fields. The university promotes an innovative and collaborative environment, demonstrated by its many partnerships with technology-related businesses. 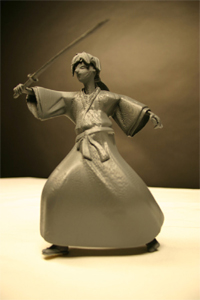 Nowhere is the atmosphere of innovation more prevalent than in the NCSU Department of Industrial Design. Here the faculty focuses on using design and technology to solve problems in a variety of fields, ranging from transportation design to medical instrumentation. Industrial Design (ID) students are taught how to creatively and practically solve loosely defined design problems, similar to those in the real world, using visualization techniques and rapid prototyping.

Spencer Barnes, an adjunct assistant professor of ID at NCSU, placed a unique challenge before the undergraduate and graduate ID students in his “Advanced Digital Product Modeling” course. He asked them to create poseable action figures using a 3D surface-modeling program (Autodesk AliasStudio) and the department’s Dimension® 3D Printer.

The summer blockbuster movie “Transformers” inspired the assignment, and the intent of the project was to show the students how to utilize workflow manipulation to complete challenging design tasks. Workflow manipulation involves approaching a design problem using novel combinations of software and output processes to effectively and efficiently complete a task. As such, this project required the students to make innovative use of the Dimension 3D Printer that neither they, nor professor Barnes, had seen done before – prototyping a functional action figure.

The students had to pick a character from a movie, cartoon or comic to model, or they could design an original figure. They drew concept and reference sketches of their characters before they could begin the modeling process. Models could be up to six inches tall (and proportionally wide) and had to be modeled with substantial detail. “Using models created by the Dimension 3D Printer, I was able to bring various design issues to the students’ attention as their models progressed, such as the draft and clearance of all of the moving parts in the model and stability, or the stance and balance of the models,” Barnes said.

After virtually modeling their action figures, the students’ models were sent to the 3D Printer using CatalystTM, Dimension’s software that converts the models into a printable file format. After printing had taken place, students prepared their models for presentation. 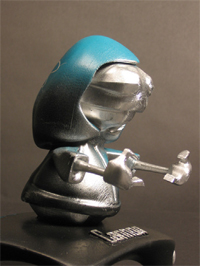 At the final critique of the project, students presented their concept and reference sketches and their action figures. “The Dimension 3D Printer worked in unison with the other design components of the project and its strengths and capabilities were highlighted by this project,” Barnes said.

According to Barnes, the students’ work was excellent and diverse; some of the action figures were inspired by cinema and others were original concepts. The poseable action figures functioned properly and the static ones were situated in stances that conveyed a strong sense of motion.

“The Dimension 3D printer definitely saved my students and me time, but most of all, it allowed us to do something that would have been otherwise impossible – to produce poseable action figures cost effectively, without the use of a service bureau and the associated lag time and production costs,” Barnes said. “The Dimension 3D Printer allows designers to drive the design process toward innovation by enabling them to efficiently visualize their ideas. It offers designers the accuracy necessary to evaluate and refine their models.”