3D printing has your back when you need it most

When pressure to maximize resources combines with a mission to provide security in extreme conditions, innovation is more than a competitive edge; it’s a life saver.

RLM Industries is a leading supplier of investment castings to the military, construction, food processing and handling, and automotive industries. The company is capable of pouring virtually any ferrous or non-ferrous alloy as an investment casting. Investment casting offers much higher levels of design freedom than other casting processes so multiple parts can often be converted into one part with a substantial reduction in manufacturing cost.

Recently a major manufacturer of components and assemblies for the military found itself in serious danger of missing critical delivery deadlines when the foundry they had been using couldn’t produce investment castings that met drawing specifications. “The gear set is a critical component in the launching of the Patriot surface-to-air missile system,” said Rick Meachum, Vice President of Sales for RLM. The original foundry used injection molding to produce investment casting patterns. It typically takes two months and costs $5,000 to $20,000 to produce injection molding tooling for investment casting patterns including review and tweaking. 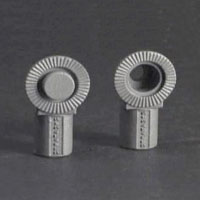 RLM’s customer needed a faster and less expensive solution to the problem and asked RLM if it could help. RLM has pioneered an approach that involves using Stratasys Fused Deposition Modeling (FDM®) to create ABS investment casting patterns. The same FDM patterns can also be used for review prior to casting, providing a perfect representation of what the final part will look like. The cost is only $1,250 to produce patterns and typical leadtime is only one week including design review and tweaking. Post operations such as machining, NDT and special heat treating would increase lead time.

“Using Stratasys equipment and technology, we were able to build patterns in less than a day,” Meachum concluded. “The patterns were then expedited through our process and in seven days we produced perfectly matching gear set castings that met drawing requirements and specifications and were functional as part of the assembly. The castings were used for a test launch and we now have time to build hard tooling with all parties confident in the knowledge that the part design and dimensional attributes are correct for a large quantity production order.”