“Our Objet 3D Printer is helping us do more with less, spurring innovation in our company and industry.”

Rietveld Architects LLP, established in New York City in 1994, is known throughout the United States and Europe for its large-scale, creative commercial and residential spaces. Its international team of architects places a premium on embracing the latest technologies in such areas as energy savings and individual environmental controls.

The firm’s partners, Margaret and Rijk Rietveld, became aware of 3D printing several years ago through a contact at the National Aeronautics and Space Administration (NASA), who shared with them some of the first 3D-printed models. They saw in this new technology the potential to vastly increase productivity and innovation in the field of architecture.

During the course of a typical project, Rietveld, like other architecture firms, builds numerous models in increasing detail and scale that help clients to visualize designs. And, like other firms, they had traditionally built these models by hand – a task that usually required two employees to spend upwards of two months cutting, assembling and finishing components made of cardboard, foam board and Plexiglass. The time and expense to hand craft these complex elements dictated that the models have an inadequate amount of detail, limiting the creativity and therefore showcasing a model that sometimes did not sufficiently highlight the selling points of the design.

Several years ago, when the construction industry began to slow down, Rietveld decided the time was right to explore 3D printing as a means to set the organization apart from the competition while at the same time increasing quality and productivity for model production. “It became evident that the pace of the industry wasn’t going to hold,” said Rijk Rietveld. “We knew that a big change was coming, and in the new environment those firms that could do more with less and stand out with superior models would be more competitive.”

The Objet Eden chosen for detail, accuracy and office friendliness 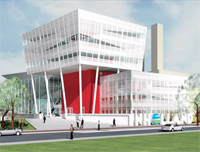 Rietveld’s leadership was familiar with the available 3D printing technologies and, after in-depth research on eight different systems, selected the Objet Eden350. “We were particularly impressed by the ability of this system to quickly produce highly detailed, accurate models with minimal office clean-up,” said Rijk Rietveld. “Some of the other technologies produced brittle models and just didn’t have the fine detail of the Objet 3D Printer.” According to Piet Meijs, an associate with the firm, the prototyping capabilities offered by the Objet Printing System have helped the firm to secure several new projects. What’ s more, existing clients have been enormously responsive to the technology, as new models can now be created and finished by a single employee in merely a matter of hours. “Frequently during a project, clients request design changes or wonder how particular changes may impact the overall aesthetic,” said Meijs.

“Our Objet 3D Printing System lets us create a whole new model right away, and that wows the client every time.”

A unique university building design, brought to life in an Objet 3D model

One compelling illustration of the power and versatility of the Objet 3D technology was a project for INHOLLAND University in the Netherlands, which sought to replace a small, existing building with a much larger space for its applied sciences program. The new space required a flexible interior plan that preserved the identities of three distinct entities that were to occupy the building.

Among the components of the building’s design was a suspended auditorium within an innovative composite material glass-wall atrium, as well as an open scissor staircase and self-study area where students could mingle and collaborate. Using the Objet Eden 3D Printer, Rietveld created detailed models that brought to life a precise representation of the complex functional requirements of the university and the unique design concepts of the Rietveld team. “The enthusiastic response from the University’s leadership played out in the extremely collaborative and streamlined approval process,” said Meijs. “Showing the details with projects like this would simply not have been possible with handmade models.”

Making the Objet 3D technology its own

According to Rijk Rietveld, less than one percent of architecture firms worldwide currently use 3D printing. He noted that the industry has been reluctant to embrace rapid prototyping technology because of concerns over the delicacy of some models produced at extreme scales. “The concerns may be justified with other products, but the Objet 3D Printer has given us the technological tools and flexibility to create even the most delicate model components,” said Meijs. For example, Rietveld has devised a method to preserve the more intricate model components by slightly modifying some design specifications for the prototypes, protecting the fine details while effectively capturing the look, feel and proportion of the structure.

Said Meijs, “The name of the game is innovation. You find a new technology with promise, and discover new and better ways of utilizing it to deliver the best design and concept to the client. We are constantly striving to better ourselves, better our industry, and our Objet 3D Printer is helping us do just that.”